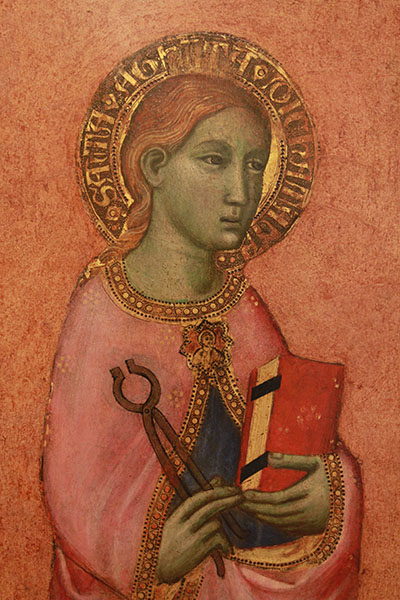 St. Agatha, virgin and martyr (†250). A young noblewoman from Catania, Sicily, where the Church suffered terrible persecution. She has been greatly venerated by the Popes, owing to St. Gregory Gregory the Great the inclusion of her name into the Roman Canon.

St. Jesus Méndez Montoya, priest and martyr (†1928). Killed by firing squad in the Archdiocese of Morelia during the Mexican persecution .

St. Sabas the younger, monk (†995). Together with his brother St. Macarius, he spread monastic life in Calabria and Lucania (Italy), during a time
of devastation caused by the Saracens.

St. Luke of Lucania, abbot (†995). He lived a monastic life, initially in Sicily, and then in several other places, fleeing the Saracen incursions. He died in the monastery of Sts. Elias and Anastasius, which he had founded in Carbone (Italy).

St. Adelaide, abbess (†1015). Descendant of high nobility, she became a nun and was elected abbess of the Monastery of Villich, Germany. She adopted the Benedictine Rule and promoted the intellectual formation of the religious.

Blessed Françoise Mézière, virgin and martyr (+1794). A laywoman who dedicated herself to caring for the sick and teaching poor children. For her faith she was decapitated in Laval during the French Revolution.

Blessed Elizabeth Canori Mora, housewife (†1825). She patiently and charitably endured her husband’s infidelity and abuse. She joined the Third Order of the Trinitarians in Rome, offering her life for the conversion of sinners, and was favoured with mystical gifts.

St. Avitus, bishop (†518). Converted St. Sigismund, King of Burgundy, to Catholicism. He defended the Gauls from the Arian heresy and died in Vienne, France. 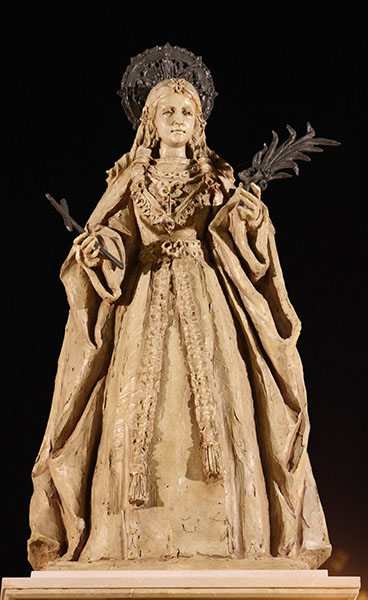 Let brotherly love continue. Do not neglect hospitality, for through it some have unknowingly entertained angels. Be mindful of prisoners as if sharing their imprisonment, and of the ill-treated as of yourselves, for you also are in the body. Let marriage be honored among all and the marriage bed be kept undefiled, for God will judge the immoral and adulterers. Let your life be free from love of money but be content with what you have, for he has said, I will never forsake you or abandon you. Thus we may say with confidence:

The Lord is my helper, and I will not be afraid. What can anyone do to me?

Remember your leaders who spoke the word of God to you. Consider the outcome of their way of life and imitate their faith. Jesus Christ is the same yesterday, today, and forever.

Though an army encamp against me,
my heart will not fear;
Though war be waged upon me,
even then will I trust. R.

For He will hide me in his abode
in the day of trouble;
He will conceal me in the shelter of his tent,
He will set me high upon a rock. R.

Your presence, O LORD, I seek.
Hide not your face from me;
do not in anger repel your servant.
You are my helper: cast me not off. R.

King Herod heard about Jesus, for his fame had become widespread, and people were saying,
“John the Baptist has been raised from the dead;
That is why mighty powers are at work in him.”
Others were saying, “He is Elijah”;
still others, “He is a prophet like any of the prophets.”
But when Herod learned of it, he said,
“It is John whom I beheaded. He has been raised up.”

Herod was the one who had John arrested and bound in prison on account of Herodias,
the wife of his brother Philip, whom he had married.
John had said to Herod, “It is not lawful for you to have your brother’s wife.”
Herodias harbored a grudge against him
and wanted to kill him but was unable to do so.
Herod feared John, knowing him to be a righteous and holy man, and kept him in custody.
When he heard him speak he was very much perplexed, yet he liked to listen to him.
Herodias had an opportunity one day when Herod, on his birthday,
gave a banquet for his courtiers, his military officers, and the leading men of Galilee.
His own daughter came in and performed a dance
that delighted Herod and his guests.
The king said to the girl, “Ask of me whatever you wish and I will grant it to you.”
He even swore many things to her, “I will grant you whatever you ask of me,
even to half of my kingdom.”

She went out and said to her mother, “What shall I ask for?”
Her mother replied, “The head of John the Baptist.”
The girl hurried back to the king’s presence and made her request,
“I want you to give me at once on a platter the head of John the Baptist.”
The king was deeply distressed, but because of his oaths and the guests
he did not wish to break his word to her.
So he promptly dispatched an executioner with orders to bring back his head.
He went off and beheaded him in the prison.
He brought in the head on a platter and gave it to the girl.
The girl in turn gave it to her mother.
When his disciples heard about it, they came and took his body and laid it in a tomb.