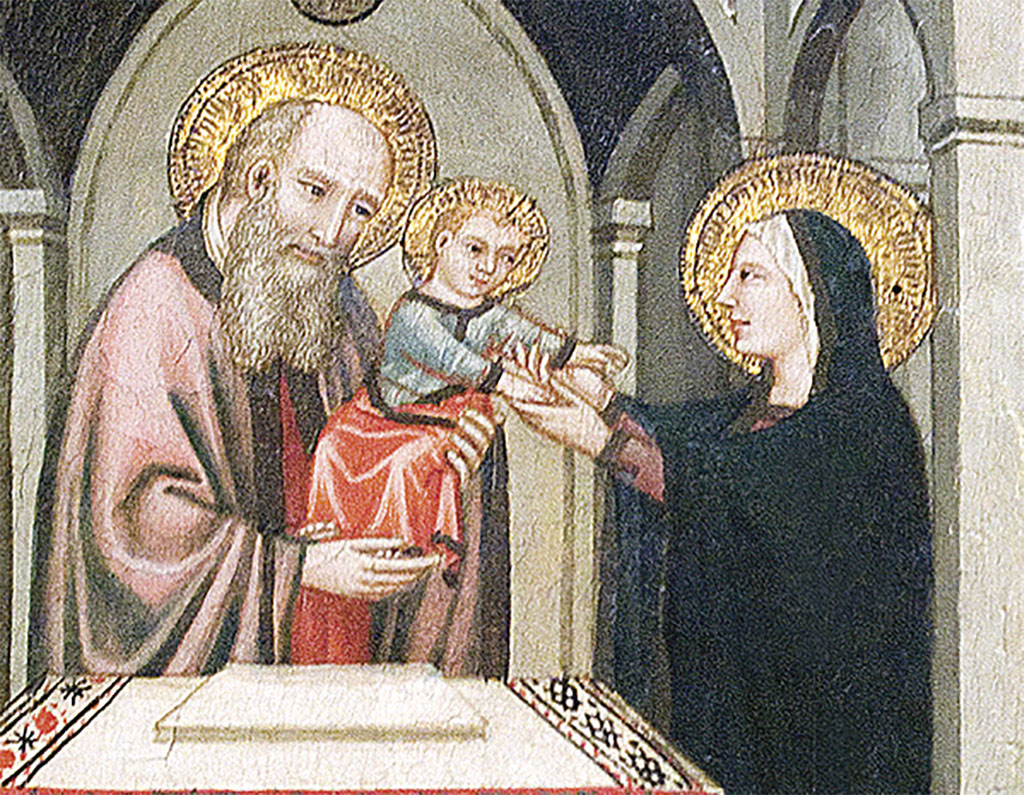 Feast of the Presentation of the Lord

The Presentation of the Lord in the Temple. Forty days after his birth, May and Joseph carry Jesus to the Temple to offer Him to God, in accordance with the prescription of the Mosaic Law, where the aged Simeon received Him and prophesied in His regard. This is also the Feast of the Purification of the Blessed Virgin Mary, which is traditionally known as the Feast of Candlemas.

St. Joan of Lestonnac, widow (†1640). After the death of her husband, she founded the Society of the Company of Mary, modelled after the Company of Jesus, for the formation of young women, in Bordeaux, France.

Blessed Stephen Bellesini, priest (†1840). Ardent devotee of the Mother of Good Counsel of Genazzano, Italy, who, throughout difficult times remained faithful to the Augustinian Order, dedicating himself to the education of children, preaching and pastoral work.

St. Lawrence of Canterbury, Bishop (†619). Sent to England by Pope St. Gregory the Great, he succeeded St. Augustine of Canterbury in the Episcopate and converted the local ruler King Eadbald to the Catholic Faith.

Blessed Louis Brisson, priest (†1908). Priest of the Diocese of Troyes, he founded the Congregations of Oblate Sisters and Oblates of St. Francis de Sales.

Blessed Maria Dominica Mantovani, virgin (†1934). First superior of the Institute of the Little Sisters of the Holy Family, which she founded in Verona (Italy) to serve the poor, orphans, and sick.

Thus says the Lord GOD: Lo, I am sending my messenger to prepare the way before Me; And suddenly there will come to the temple the LORD whom you seek, And the messenger of the covenant whom you desire. Yes, He is coming, says the LORD of hosts. But who will endure the day of his coming? And who can stand when He appears? For He is like the refiner’s fire, or like the fuller’s lye. He will sit refining and purifying silver, and He will purify the sons of Levi, refining them like gold or like silver that they may offer due sacrifice to the LORD. Then the sacrifice of Judah and Jerusalem will please the LORD, as in the days of old, as in years gone by.

R. Who is this king of glory? It is the Lord!

Lift up, O gates, your lintels;
reach up, you ancient portals,
that the King of glory may come in! R.

Who is this King of glory?
The LORD, strong and mighty,
the LORD, mighty in battle. R.

Lift up, O gates, your lintels;
reach up, you ancient portals,
that the King of glory may come in! R.

Since the children share in blood and flesh, Jesus likewise shared in them, that through death He might destroy the one who has the power of death, that is, the Devil, and free those who through fear of death had been subject to slavery all their life. Surely He did not help angels but rather the descendants of Abraham; therefore, He had to become like his brothers and sisters in every way, that He might be a merciful and faithful high priest before God to expiate the sins of the people. Because He himself was tested through what he suffered, He is able to help those who are being tested.

Now there was a man in Jerusalem whose name was Simeon.
This man was righteous and devout,
awaiting the consolation of Israel,
and the Holy Spirit was upon him.
It had been revealed to him by the Holy Spirit
that he should not see death
before he had seen the Christ of the Lord.
He came in the Spirit into the temple;
and when the parents brought in the Child Jesus
to perform the custom of the law in regard to Him,
he took Him into his arms and blessed God, saying:

“Now, Master, You may let your servant go
in peace, according to your word,
for my eyes have seen your salvation,
which You prepared in the sight of all the peoples:
a light for revelation to the Gentiles,
and glory for your people Israel.”

[The Child’s father and mother were amazed at what was said about Him;
and Simeon blessed them and said to Mary his mother,
“Behold, this Child is destined
for the fall and rise of many in Israel,
and to be a sign that will be contradicted
-and you yourself a sword will pierce-
so that the thoughts of many hearts may be revealed.”
There was also a prophetess, Anna,
the daughter of Phanuel, of the tribe of Asher.
She was advanced in years,
having lived seven years with her husband after her marriage,
and then as a widow until she was eighty-four.
She never left the temple,
but worshiped night and day with fasting and prayer.
And coming forward at that very time,
she gave thanks to God and spoke about the Child
to all who were awaiting the redemption of Jerusalem.

When they had fulfilled all the prescriptions
of the law of the Lord,
they returned to Galilee, to their own town of Nazareth.
The Child grew and became strong, filled with wisdom;
and the favor of God was upon him.]