Faith and Science, Church and State 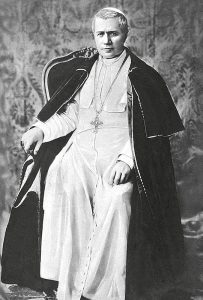 One hundred years ago, with prophetic insight, St. Pius X analysed a dangerous fallacy: if the Church is born from the religious conscience of individuals, it should bend before the civil authority and move towards the evolution of its dogmas in accordance with the vicissitudes of history.

A[ccording to modernists,] it was a common error of the past to judge that the authority of the Church comes directly from God; and it was then rightly held to be autocratic.

But this conception has now become obsolete. For having declared, as they do, that the Church is a vital emanation of the collectivity of consciences, so too its authority emanates from the same source. And if both the Church and its authority have their origin in the religious conscience, and for that reason, are subject to it, any form of government that disclaims this subjection should be considered tyrannical.

This notion of liberty has reached its fullest development in the present age.

All the more so, given that, if it refuses to do so, it faces imminent ruin. For it is madness to suppose that the sentiment of liberty, as it is now in force, can be made to turn back. Any attempt to forcibly suppress or confine it in bonds, would bring about an even more terrible outburst, which would destroy both the Church and religion together.

Every citizen should enjoy complete liberty

Based on such reasoning, the Modernists apply themselves to finding a path of conciliation between the authority of the Church and the liberty of believers.

The ecclesiastical authority would have to adopt these democratic forms, at the risk of provoking and fomenting an internal conflict within the human conscience

But it is not with its own members alone that the Church must come to an amicable arrangement; besides its relations with those within, there are others outside. The Church does not occupy the world all by itself; there are other societies in the world, with which it must necessarily have contact and relations.

The rights and duties of the Church towards civil societies must, therefore, be determined, and determined by none other than the very nature of the Church, as the modernists have described it to us. […]

Formerly it was possible to subordinate the temporal to the spiritual and to speak of mixed questions, in which the Church intervened as queen and mistress, because the Church was then regarded as having been instituted immediately by God as the Author of the supernatural order.

But this doctrine is today repudiated by philosophers and historians alike. The State must, accordingly, be separated from the Church, and the Catholic from the citizen. Every Catholic, as a citizen, has the right and the duty to act as he thinks best for the common good, without troubling himself about the authority of the Church, its wishes, its counsels, or its orders, and even despising its reprimands.

To prescribe for the citizen any line of conduct, on any pretext whatsoever, is to be guilty of an abuse of ecclesiastical authority, against which every effort of resistance should be made. […]

What, then, becomes of ecclesiastical authority?

But, for the Modernist school, it is not enough that the State be separated from the Church. For as faith should be subordinated – as far the so-called phenomenal elements are concerned – to science, so, too, in temporal matters the Church must be subject to the State.

Perhaps they do not declare this openly as yet, but they are compelled to acknowledge it by force of reasoning. Indeed, once the principle of absolute dominion of the State in temporal matters is posited, it follows that when the believer, not content to limit himself to merely internal acts of religion, proceeds to external acts, such as, for example, the administration or reception of the sacraments, these will necessarily fall under the control of the State.

Once the principle of absolute dominion of the State in temporal matters is posited, it follows that the external acts of the believer necessarily fall under the control of the State

What, then, becomes of ecclesiastical authority? Completely subject to the civil power as regards all external acts, it loses its purpose.

It is this inevitable consequence which impels many among the liberal Protestants to cast off all external worship, and even all external religious community, and to advocate what they call individual religion. If the Modernists have not yet reached this extreme, they nonetheless demand that the Church willingly allow itself to be led by them, and adapt itself to the civil forms.

The law of evolution, basis for the “historical method”

Such are their ideas concerning disciplinary authority. But far more advanced and far more pernicious are their opinions on doctrinal and dogmatic authority. […]

And as this magisterium, in the final analysis, is nothing but a product of individual consciences, and possesses its public office for their benefit alone, it follows that the ecclesiastical magisterium must be subordinate to these same consciences. […] The modernists hold the general principle that in a living religion, everything must be changeable, and should in fact change. In this way, they open the way to one of their chief doctrines, that of evolution. If Dogma, the Church, worship, the Books we revere as Sacred and even faith itself are not dead things, they must be subject to the laws of evolution. […]

The main stimulus for evolution in the domain of worship consists in the need to adapt itself to the uses and customs of the people, to avail itself of the value which certain acts have acquired in the temporal sphere. Finally, evolution in the Church itself is driven by the need to accommodate itself to the historical conditions and to harmonize itself with the prevailing forms of civil government.

The modernists hold the general principle that in a living religion, everything must be changeable, and should in fact change

And here, before proceeding further, I would have you note well this whole theory of necessities and needs, for it is at the root of the entire system of the Modernists, and it is upon it that they will erect the famous method which they call the historical.

Progress will result from the conflict of two forces

Continuing the analysis of the doctrine of evolution, it is also to be noted that, although concrete necessities serve as stimuli for evolution, they are not the only factor with a role in this process. For if such were the case, evolution would easily transgress the bounds of tradition, and thus, disconnected from its primordial vital principle, would lead to ruin instead of progress.

Hence, studying the ideas of the Modernists more closely, evolution should be described as resulting from the conflict of two forces, one of them tending towards progress, the other towards conservation.

The conserving force in the Church resides in tradition, and it is represented, both by right and in fact, by religious authority. By right, as it is in the very nature of authority to protect tradition, and, in fact, for authority, raised as it is above the contingencies of life, feels hardly, or not at all, the inducements to progress.

The progressive force, on the contrary, which pushes forward in response to concrete necessities, resides and acts within the individual consciences – especially within those that are, as they say, in most intimate contact with life. […] Thus it is then, that for the Modernists, both as authors and propagandists, there is to be nothing stable, nothing immutable in the Church.

Excerpts from: Pascendi Dominici gregis, 8/9/1907 – Translation: Heralds of the Gospel

The three Wise Men did not see the Child ruling over demons or raising...
Read more
Opinion

The Parable of the Crippled Woman

When the soul aspires to heavenly goods, it remains upright, without the least bending....
Read more